Every year Florence has his own little Christmas market. You can buy mostly German specialties and nice little christmas accessories. The market is held on one of the most beautiful squares of Florence; Piazza Santa Croce. You can eat your crautie and  wurstel untill the 18th of december every day from 10am to 8pm!


Happy Friday and a lovely weekend !


The 'Giardino dei Boboli' is located behind the 'Palazzo Pitti' and it is said to be the most beautiful garden of Tuscany.  I love to come here for a stoll together with my kids , being  fortunate residents of Florence we have free entrance to this beautiful garden (not indicated for strollers as there are some steep paths).


Do not miss the Boboli garden if you're in Florence. This wonderful and hilly oasis of peace is filled with statues, and designed in the typical Italian style. You can enjoy quiet walks on a cool summer days, but for me the autumn is the most perfect season to visit this city garden/park.

The colors, the smell, the stillness .. absolutely fantastic. And to think that all the traffic is buzzing beneath you but here in the park, you will not hear a thing. Why not relax a bit on a bench near the Neptune Fountain, or climbing the beautiful spiral staircase up to the Rose Garden and the Porcelain Museum, here you find yourself on the highest point of the garden with a magnificent view of the hills that surround Florence.


Walk down the beautiful cypress avenue (Vialone), where you will find the mysterious Isolotto pond. If you are lucky you can see the large collection of citrus plants in large terracotta pots in the middle of the pond on the little island (in the winter they stay in the 'limonaia').
From the Boboli garden you can also visit 'La Specola' historic Zoological Museum (the oldest museum of science in Europe). You can also visit the beautiful garden of Villa Bardini, Giardino Bardini. On the left side of the Forte Belvedere (close to the Kaffeehaus) you can take Costa San Giorgio (take a left), half way down you can find the entrance to the garden and the villa Bardini.

The Corridoio Vasariano, or Vasari corridor, is part of the Uffizi museum. This "secret passage" starts at the Palazzo Vecchio (Town Hall) and crosses the Uffizi Museum, runs over the Ponte Vecchio and the rooftops of the city and ends up in the Boboli Garden (Pitti Palace).

A 'Must Do' visit
The Vasari Corridor is part of the 'hidden treasures of Florence' and is open to the public a few months a year.  You can only visit this 'secret hallway' by booking quit some time ahead, but it is absolutely worth your while. If you are a real 'treasure' hunter, this is 'The One' you can not miss!


My visit to the Vasari Corridor
Last week I visited the Vasari Corridor for the second time. It was a grey and rainy day, the perfect weather conditions to discover this mysterious hallway. At 9.00 am the doors to the Corridoio Vasariano (right next to exhibition room n ° 25) opened and we (together with 15/20 people) finally can start our tour.


The story about the Corridor ...
The corridor was commissioned by Cosimo de 'Medici I and built by Vasari in only five months. The Vasari Corridor goes from the Palazzo Vecchio (where the family de'Medici practiced their politics' ) through the Uffizi Gallery (where the administrative offices were) to Palazzo Pitti (where the family de'Medici lived) . The guide explains us (only in Italian) that the Vasarian Corridor was built to avoid life-threatening situations for the de'Medici family. The corridor also acted as an escape route in case of a revolution.


The painting and the bombing ...
Before we walk into the Vasari Corridor, the guide tells us something about the big damaged painting of made by artist Gerrit van Honthorst. This painting, 'L'adorazione dei Pastori', hung opposite a window under which the 1993 Mafia bomb was placed. The glass and the heat damaged the painting so,  that little could be saved. Ten years later, the 'L'adorazione dei Pastori ' was restored for about 50% and is now  "used "as a symbol of that terrible bomb attack in which five people were killed.

0.62 miles (1 km)  long ...
The Vasari corridor is nearly 0.62 miles (1 km)  long and very narrow (about 3.5 meters wide), you really have to watch out to not accidentally walk against the paintings while you walk and listen to the tourguide. It is an immense feeling that you can come so close to the paintings. On the right side of this part of the Vasari Corridor are hanging the Tuscan painters and on the left site the Italian painters. Most paintings come from the 16th and 17th century.

The self portrait collection ...
The highlight of your visit to the Corridoio Vasariano will be without doubt the the self portrait collection. Cardinal Leopoldo de 'Medici started this collection for the de'Medici family and gathered the self potraits of well-known artists. At the beginning, the portraits were paid in nature for example with crates of fresh sausage, honey, wine and other delicacies. Gradually the collection of Leopoldo de 'Medici became more and more famous. If you were an artist who counted, then Cardinal Leopold de 'Medici had your portrait! The collection includes a portrait of Rembrandt and a potrait of Chagall.


The tower and the church ...
A little further down the hall, the Corridoio Vasariano makes a strange turn. And goes around the medieval Manelli tower. The owner of the tower didn't want to sell his home, so Vasari just built the Corridor around it. Another nice 'pit stop' is the big opening from which you can see the Chiesa di Santa Felicità. Here the de'Medici family attended Mass every sunday. This church is also one of the most ancient churches of Florence. In this church you can see a few of the most important Renaissance works of art, such as 'Deposizione' by Pontorno (oil on wood, 1525-1528).

Wondering and gazing at the most beautiful portraits and before we know it, the Vasari Corridor ends and we're standing in the Boboli Garden..... it's still raining and the sun i is nowhere to be seen, time for a warm cappuccino...

Note 1°: Every day a nice photo of Florence ? Follow 'ontdekflorence' on Instagram
or
checkout hashtag album: #discoverflorence on Inkstagram

Note 2°: You can't take pictures of the paintings and sculptures in the Vasari Corridor 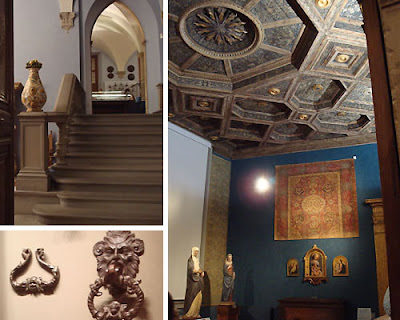 The Museo Stefano Bardini (1836-1922) was founded by one of the most important Italian antique dealers, Stefano Bardini. Bardini decides  to accommodate all his collections from the Middle Ages and the Renaissance in a beautiful Palazzo near the Arno, former church and convent of San Gregorio della Pace. Later, he donated his entire collection to the city of Florence. "His" museum is now part of the 'Musei Civici Fiorentini '(municipal museums of Florence). 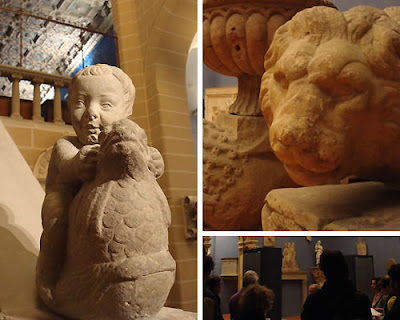 The special thing about the Museo Stefano Bardini  is that you really get the feeling that you are visiting an interior decorater instead of a museum. The golden empty frames against a cobalt blue wall. Original stone pieces like staires and statues which have been incorporated into the Palazzo in the most perfect way. The beautiful little statues on an antique dresser. It is definitely not the dusty and old museum that you would expect it to be, but a true inspiration for every visitor. 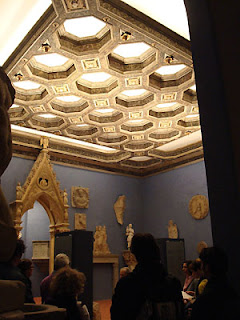 Note 1: This museum is part of the initiative : Pass dei Tesori 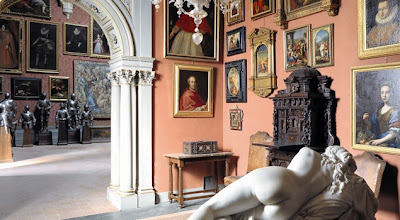 The Museo Stibbert is an unexpected and lesser-known museum situated just outside the city center of Florence (Zone Fortezza da Basso). A triumph of gold and treasures, shields, knight equipment and paintings, it looks like a fairytale. This is the temple, the empire, of the art collector Frederick Stibbert (1836-1906). 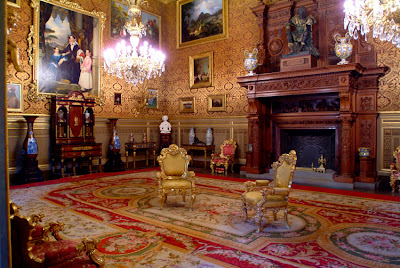 Stibbert benefited from his diverse nature as an international financial consultant, world traveler and passionate art collector to control the antique trade in Europe for 50 years and to realize his ambitious project;  Making Villa di Montughi his 'own museum'. 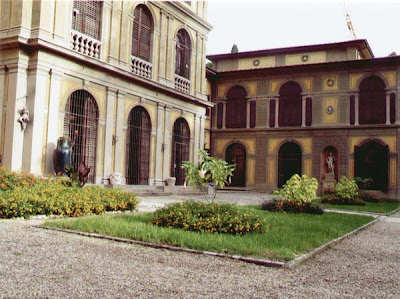 Let the great passion of Stibbert for the history of costumes and accoutrements of war from the Far East and Japan, carry you through his unique museum. Visit the Stibbert Park with its beautiful Limonaia (building where the citrus trees were placed in winter), stable and the small Egyptian temple next to the pond, personally made by Stibbert. Do you want a break from the bustle of the city and do you want something out of the straordinari? Then this musem is just the place for you!

Museo Horne, an Englishman in Florence

In 1911, English architect and art historian Herbert Percy Horne, buys the Palazzo Corsi in Via de 'Benci.  Horne brings his large collection of paintings, sculptures, drawings and furniture to this beautiful Palazzo with the intent of recreating a Renaissance home. In 1926 Horne dies and leaves his collection (which now counts more than 6000 pieces) to the Italian state. 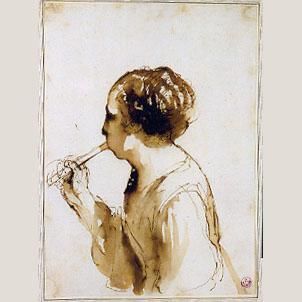 Today, the Museo Horne is still decorated as the architect and art historian wanted it: a refined exhibition of paintings and sculptures (from Giotto and Masaccio to Giambologna), but most of all he wanted a home decorated with the finest furnishings and artworks from 12th untill the 16th century. 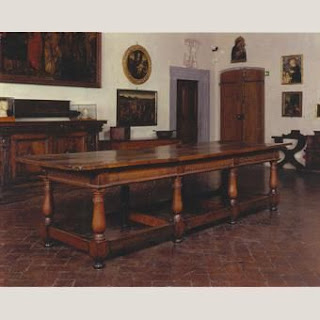 The Horne Museum is a wonderful place for those who want to know more about the Florentine past. Discover in every room the use, the habits and the Florentine art, it's like going back in time, back to the golden days of the renaissance. A visit to this lesser-known but no less beautiful museum, makes your stay in Florence a whole lot more interesting that's for sure! 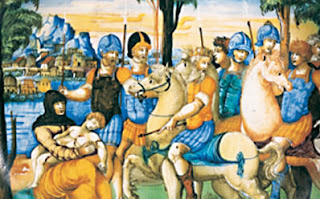 The Rose Garden, an oasis of peace in the city

Florence has several gardens and parks, a few are well known others less. The Rose Garden (Giardino delle Rose) is one of the last category. Untill this year the Rose Garden was only open during the months of May and June, but fortunately that's changed. Since spring (2011) of this year, you can admire the Rose Garden all year long from early in the morning until sunset.


The Japanese garden and Folon
The Rose Garden was restored last year and enriched by 12 permanent pieces of art (mostly statues) from the Belgian artist Folon  There is also a small part of the garden dedicated to a Japanese garden (The Shorai garden), donated together with the Zen Temple "Kodai-Ji" to Florence in 1998 by the Japanese city of Kyoto.


There are several entrances to the Rose Garden;
1. If you come from San Niccolò ("below" the Piazzale Michelangelo)
you can enter a small gate at the intersection of Via del Monte All Croci and Via di San Salvatore
al Monte (stairs)
2. The main entrance of the garden is halfway down/up the stairs (Via di San Salvatore al
Monte) on the left side of the Piazzale Michelangelo (just before the ice cream parlor).


Opening Hours:
- The garden is open all year round from 8:00am to sunset!
- The best months to visit the garden are May and June, when there are over a 1,000 different roses in bloom (including 350 ancient species). 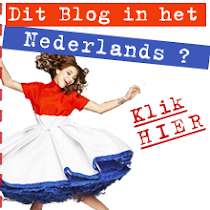